Gamers and non-gamers all around the world are familiar with the story of Mario and his ‘second fiddle’ brother Luigi. The Mario brothers have competed in many tournaments over the years, gaining them worldwide recognition for their hosting of and participation in the many exhibitions of sport. While the two often play together, Luigi has been known to be constantly out-shined by his older brother and at times, downright humiliated by him. It seemed like Luigi couldn’t even get his brothers support during one of the few times he actually won a tournament.

Here you can clearly see Mario slapping his little brother hard on the back, grinding his shoe and laughing hard in his face during what should be a heart-warming moment.

Game Theory’s Mat Pat has given plenty of evidence on his YouTube channel to suggest that gamings biggest mascot may indeed be a psychopath. The story behind Mario’s cruelty is so deep it actually took Mat Pat two whole episodes to fully explain. You can follow the links to the two episodes here.

People around the world felt sorry for Luigi. They held pity for the poor fellow and his terrible plight. The  good ol’ green guy just couldn’t catch a break. 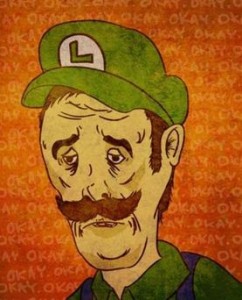 The stress of getting squashed over and over again and still having  to help his older brother when the time came was taking it’s toll on Luigi. It was widely believed that Luigi would always be number two, always slightly left of the limelight. Little did anyone know though, that he would soon become the fiercest starchild to ever compete in any tournament.

It all started one fateful day during the eighth Mario Kart tournament. It was the day Luigi finally released his bottled hatred for always being treated like dirt, always being second(even to his lame evil counterpart Waluigi) in one deadly stare.

The world was shocked at this new uncharacteristic behavior from Luigi. One look was all it took to know that something inside this man had changed drastically. His very aura was enough to leave spectators speechless.

This change of personality from such a well known figure was so startling that it was even featured on the ten o’clock news.

It was only then that the world realized just how dangerous Luigi could be. His death stare quickly became iconic.

After unleashing his inner demon, Luigi was seen implementing the most brutal tactics to best his brother and grow in popularity.

Mario wasn’t just going to sit back and let his younger sibling beat him at his own game. He tried taking down his former whipping boy but Luigi was on a path to stardom that could not be stopped by anything, or anyone.

Luigi’s new persona yielded him a meteoric rise within the gaming community, making him a regular celebrity. 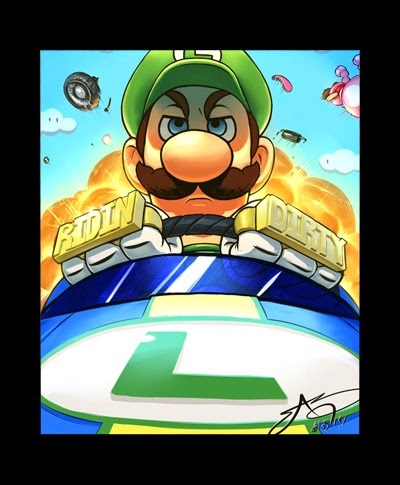 Shortly after his rise to fame, Luigi began to be spotted hanging out with known gangster rappers such as Ice Cube and 50 Cent.

He became such a dominant player of the game, some even suggested the name be changed to match it’s new champion.

It would seem to many that this was a long time coming for the new hero; that finally, he was getting the recognition he deserved. Though, some were still wary of the darkness they had seen in his eyes. Unfettered by his empowering new identity, he went on to  triumph over Mario in other tournaments such as the ever popular Super Smash Bros tournament. Luigi was beginning to demonstrate to his older brother what it feels like to be under the crushing weight of a superior opponent.

Luigi now reigns supreme in all competitions and is a force to be feared by all who oppose him.

Mario has since continued to participate in tournaments but has been noticed to have a considerably different and defeated demeanor than his before bubbly behavior. 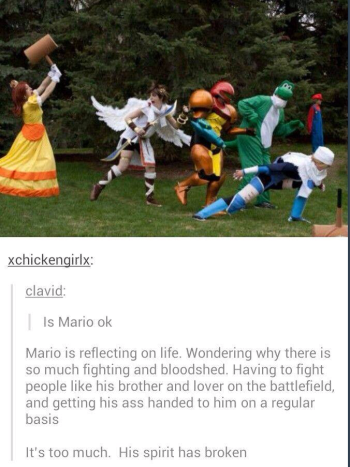 Filled with the guilt from the error of his ways, Mario is finally faced with the grim reality of what he has caused for others. Nobody knows if Mario will ever be the same or if this will change him for the better. 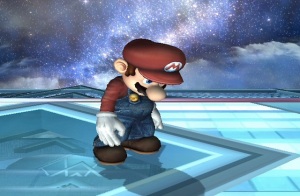 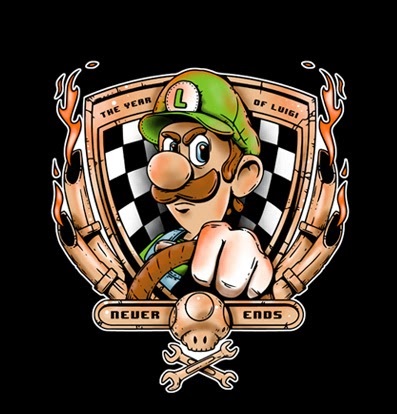